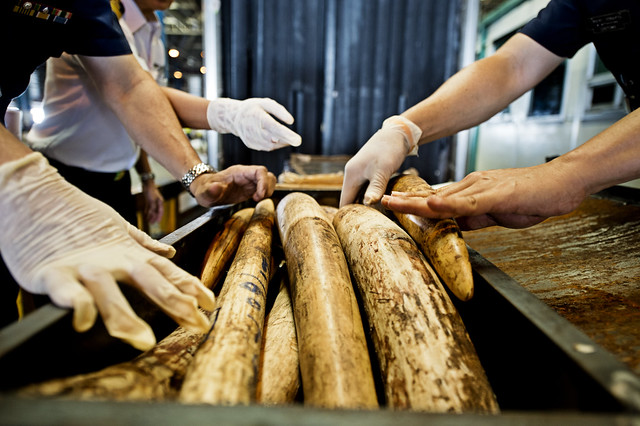 Wildlife conservationists meeting in Honolulu for the IUCN’s World Conservation Congress are shocked and saddened by the release of the Great Elephant Census showing that numbers of African savanna elephants have declined by 30 percent – 144,000 elephants – between 2007 and 2014.

The Great Elephant Census is the result of a two-year-long study, the centerpiece of which was an aerial survey, the first in 40 years, that covered nearly 345,000 square miles over 18 countries.

The census was a collaboration between billionaire and Microsoft co-founder Paul G. Allen, his organization, Vulcan, and Elephants Without Borders, African Parks, the Frankfurt Zoological Society, the Wildlife Conservation Society, the Nature Conservancy, the IUCN African Elephant Specialist Group and Save the Elephants, as well as a long list of conservation officials in the countries surveyed.

“Poverty and corruption still remain very serious problems in countries that are home to the worst killing grounds, and these factors continue to drive a thriving international ivory market – along with similarly voracious demand for horns from endangered rhinos.”

“As you’ve been reading this, poachers likely killed another African elephant for its tusks – an atrocity that takes place, on average, every 15 minutes,” said Allen.

At least 20,000 elephants were killed in 2014 for their tusks, at a rate faster than they are being born, the census found.

There are a few hopeful signs that emerged from the Great Elephant Census. Said Allen, “A handful of countries are doing a pretty good job of protecting their elephants, and their approaches can serve as models for other nations whose conservation efforts have been failing.”

Relative success stories include Botswana, South Africa, Uganda, Kenya, and the complex of parks spanning the border of Burkina Faso, Niger and Benin.

Allen says that in countries where poaching is still rampant, such as Tanzania and Mozambique, “…the survey’s alarming results have spurred officials to strengthen protections for their surviving elephants, and to crack down on the criminal networks that are driving the slaughter.”

Conservationists say that now that the scope of the problem is known and locations where resources can do the most good are identified, authorities can become more effective in their approaches to eliminating the poachers.

UN Environment deputy head Ibrahim Thiaw sees reasons for hope, pointing out that elephant populations in some African nations are declining only slightly or even increasing. And support for tackling the crisis is increasingly backed by a growing public, political and private sector force for change – such as the Wild For Life campaign.

“Across Africa, nations are starting to see that wildlife is worth more alive than dead, and that it can generate revenue, through tourism for example, to fund the education, health care and infrastructure that will improve human well-being and drive economic growth,” said Thiaw.

The alarming results of the Great Elephant Census have raised the urgency of the fight against poachers to new heights.

Jason Bell, director for the International Fund for Animal Welfare’s Elephant Program, warned, “Elephants have reached the tipping point and the next five years are critical if we want to turn this around.”

First, he said, coordination of the the money made available through the donor community to address poaching and trafficking must be greatly improved as there is “a lot of competition for resources and different views of what the priorities are.”

Second, said Bell, “We have to stop toying with the idea of renewed legal sales of ivory through the Convention on International Trade in Endangered Species, CITES. Both Namibia and Zimbabwe have put forward proposals to the 17th Conference of the Parties to CITES, to be held in Johannesburg in September, to deregulate the ivory trade to allow for quota sales to Asian markets. This has to stop.”

“It continues to send the wrong signals to consumers and undermine on-the-ground efforts to combat poaching,” said Bell. “The only message any potential consumer should get right now is that it is illegal to purchase ivory.”

Third, he said, “we must ensure that all efforts to address poaching, at any scale, are not only focused on keeping poachers out of parks, but on building a network of communities to combat and defeat the criminal networks.”

“It can no longer be about just the poacher or the trafficker, it has to be about the unravelling the organized criminal syndicates involved in wildlife crime,” said Bell.

As the latest global conservation agenda emerges at the IUCN Congress in Honolulu, wildlife trafficking is among the key issues on everyone’s mind.

This week, IUCN Members will debate two motions that address this critical issue. Recognizing, understanding and enhancing the role of indigenous peoples and local communities in tackling the illegal wildlife trade crisis is the subject of one of the motions.

The second is a motion that encourages all governments to close their domestic ivory markets. The illegal killing of elephants for their ivory is a problem across much of Africa, and there is a call for countries around the world to close their domestic ivory markets in response. Yet, there is no unanimity among IUCN Members on the issue – a vote is expected this week.