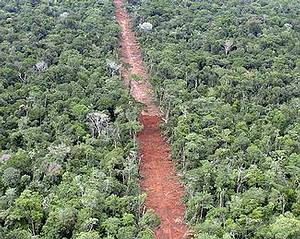 To combat global warming, the rich countries must create a fund to conserve the Amazon rainforest, Brazilian President Luiz Inacio Lula da Silva told 100 parliamentarians from around the world Thursday in Brasilia. At the meeting, senior executives of 20 of the world's largest forestry companies announced that tropical forestry would be based on certified sustainable forest management by the year 2015.

The two day Brasilia Parliamentary Forum on Climate Change is the latest in a series of key global forums on climate change that link directly to the Group of Eight, G8, process. It was hosted by the Brazilian Congress on behalf of GLOBE International and the Alliance of Communicators for Sustainable Development.

Legislators attended from the G8 countries - Canada, France, Germany, Italy, Japan, Russia, the UK, and the United States - as well as from the emerging economies of Brazil, China, India, South Africa and Mexico. The lawmakers met to draw up proposals for addressing climate change to be taken to the next G8 meeting in July in Japan.

During his speech, President Lula argued that in addition to meeting their own emission targets the developed countries should support the climate change and forest conservation efforts that are already being undertaken by Brazil because they benefit the entire planet.

Lula suggested that the wealthy countries pay the costs of reducing deforestation and the protection of forests by means of voluntary contribution, a proposal he has made at the past two United Nations climate change conferences in Nairobi in 2006 and in Bali in 2007.

The forestry executives have been participating in GLOBE’s ongoing dialogue on Illegal Logging and Sustainable Forestry along with senior lawmakers and representatives of civil society and international organizations. More than US$15 billion dollars are estimated to be lost per year in government revenues to developing countries due to illegal logging practices.

"As senior executives of companies dependent on the integrity of tropical forests we understand and acknowledge the problems caused by tropical deforestation and degradation," said Andres Gut, chairman of Precious Woods, a major timber producer in Brazil and Central Africa. "We firmly believe that tropical timber production remains a vital economic activity but only when conducted on a sustainable basis and certified accordingly."

"This step from the industry will need to be matched by political commitments to develop new financing mechanisms that recognize the true value of forests, within ecosystems services,” said GLOBE’s Forestry Dialogue Chairman Barry Gardiner MP, who has been working closely with this group of forestry CEOs.
With the increased political focus on the role of forests, in particular following the UN Bali Conference climate agreement that set a Road Map for achieving a successor to the Kyoto Protocol after it expires in 2012, the forestry CEOs wanted to look at how their sector will change and the potential impacts on their business models.

They recommend developing new mechanisms in areas such as global product licensing, ecosystem service markets, and incentives for avoiding deforestation.

Commenting on the forestry executives' statement, Katherine Sierra, vice president of sustainable development with the World Bank, said, "It is critical for producers and importers of timber to move their business to the forefront of sustainability by endorsing socially and environmentally responsible practices. This statement of leading companies and their CEOs represents a significant step forward."

More information on GLOBE is online at: http://www.globeinternational.org