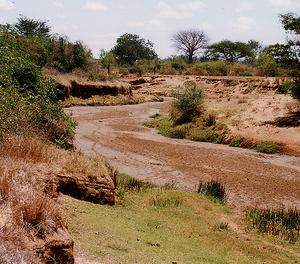 "Behind the world food crisis is a global freshwater crisis, expected to rapidly worsen as climate change impacts intensify," Leape said. "Irrigation-fed agriculture provides 45 percent of the world's food supplies, and without it, we could not feed our planet's population of six billion people."

Leape warns that many of the world's irrigation areas are highly stressed and drawing more water than rivers and groundwater reserves can sustain, especially in view of climate change. At the same time, he said, freshwater food reserves are declining in the face of the quickening pace of dam construction and unsustainable water extractions from rivers.

At a time when billions of people live without access to safe drinking water or suffer ill health due to poor sanitation, when food producers battle biofuel producers for land and water resources, and when global climate change is altering the overall water balance, 2,500 water experts are gathered this week at the Stockholm International Fairs and Congress Center to craft solutions to these problems.

World Water Week is an annual event co-ordinated by the Stockholm International Water Institute. This year's conference has the overall theme of “Progress and Prospects on Water: For A Clean and Healthy World with Special Focus on Sanitation" in keeping with the UN declaration of 2008 as the International Year of Sanitation.

As developing countries confront the first global food crisis since the 1970s as well as unprecedented water scarcity, a new 53 city survey presented at the conference by the International Water Management Institute indicates that 80 percent of those studied are using untreated or partially treated wastewater for agriculture.

"Irrigating with wastewater isn't a rare practice limited to a few of the poorest countries," said IWMI researcher Liqa Raschid-Sally and lead author of a report on the survey results. "It's a widespread phenomenon, occurring on 20 million hectares across the developing world, especially in Asian countries, like China, India and Vietnam, but also around nearly every city of sub-Saharan Africa and in many Latin American cities as well."

Wastewater is most commonly used to produce vegetables and cereals, especially rice, according to this and other IWMI reports, raising concerns about health risks for consumers, particularly when they eat uncooked vegetables.

Consumers across the 53 cities said they would prefer to avoid wastewater produce. But most of the time, they have no way of knowing the origin of the products they buy. Farmers, too, are aware that irrigating with wastewater may pose health risks both for themselves and the consumers of their produce, but they have little choice, since safe groundwater is seldom an accessible alternative, according to the IWMI report.

The report highlights indigenous practices that can reduce the health risks from wastewater agriculture. In Indonesia, Nepal, Ghana and Vietnam, for example, farmers store wastewater in ponds to allow suspended solids to settle out.

Countries lacking the means for adequate wastewater treatment can still reduce health risks through low-cost interventions, such as the use of drip irrigation and washing of fresh produce in clean water.

Of the world's total water resources, 97.5 percent is salty and of the remaining but mainly frozen freshwater, only one percent is available for human use, said Leape, the WWF chief. "Even this tiny proportion, however, would be enough for humans to live on Earth if the water cycle was properly functioning and if we managed our water use wisely," he said.

But Leape warned the conference delegates that the world is a long way from being ready for a worsening water crisis in part because of climate change and lack of an ecosystem approach to freshwater management.