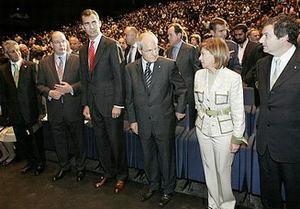 "Absolutely everyone now agrees that we can't postpone decisive action if we are to avoid major disruptions in all spheres of human and natural activities," said Julia Marton-Lefèvre, director general of the International Union for Conservation of Nature. "Business as usual is simply not an option."

Marton-Lefèvre was addressing more than 8,000 specialists from the conservation community, governments, nongovernmental organizations, academia, private sector, women and indigenous groups who have gathered in Barcelona for the IUCN's World Conservation Congress, held once every four years.

"In the last four days the call to protect the planet has been heard from both government leaders and the NGO community," says Valli Moosa, president of IUCN. "Environmental concerns are now at the top of the decision-makers priority list."

While the world is entangled in the turmoil of a financial crisis, at the World Conservation Congress civil society, environmentalists, governments and business have been defining a different way forward.

The 10 day conference opened Sunday and even during these difficult financial times, it has been the occasion of announcements of substantial investments in conservation funding.

The eight places all have high concentrations of species, many of which are found nowhere else and all are under extreme threat. They include the Lower Mekong, Eastern Himalayas, and Melanesia in Asia and the Pacific; Madagascar and the Albertine Rift in Africa; and the Insular Caribbean and southern and northern Andes in Latin America.

"The scale and urgency of the climate change problem demands that the international conservation community step up its efforts," said MacArthur President Jonathan Fanton told conference participants in Barcelona. "It is clear that for conservation to succeed in the face of climate change there must be shared science, coordinated action, and the capacity for rapid response, backed up with increased financial resources."

The focus of this fund will be global and eligibility for grants will extend to all plant and animal species conservation efforts, without discrimination on the basis of region or selected species.

A new project was announced today that will encourage businesses that have built their brands based on threatened species to invest more in the preservation of their natural habitats. The Save Your Logo campaign intends to attract private sector involvement and build broad public support to sustain biodiversity.

The Global Environment Facility will invest $5 million to launch the pilot phase of the project and will work with the World Bank and IUCN, and in cooperation with the Belgian NGO Noe Institute, to leverage conservation co-financing from the private sector.

An agreement on principles guiding forest management in view of climate change was announced by a group of 250 that includes representatives of governments, forestry companies, trade unions, environmental and social groups, international organizations, forest owners, indigenous peoples and forest-community groups.

The Forests Dialogue's Initiative on Forests and Climate Change specifies that sustainable forest management that reduces deforestation and degradation and that actively supports the livelihoods of millions of forest-dependent communities must now be one of the world's highest priorities. The group said in a statement, "This is because forests and forest products have the unique ability to reduce greenhouse gas emissions, capture carbon, and lessen peoples' vulnerability to climate change."

Other far-reaching agreements were concluded this week. Agreement on key principles on high-seas governance were achieved and new working relationships with fishermen's associations and conservation groups were established.

With initiatives such as The Economics of Ecosystems and Biodiversity, which presents a "comprehensive and compelling economic case for the conservation of biodiversity," according to its author Pavan Sukhdev, a senior figure in Deutsche Bank, collaboration between the conservation and business worlds is taking on new strength.

"What we have seen is a defining moment in bringing different perspectives together and, in some cases, developing consensus that will have an important and long-lasting impact," says Bill Jackson, deputy director general of IUCN.

"We heard about new facts, mostly negative, and about new science and solutions. I think we are setting a different and much more productive way to deal with fundamental conservation issues," Jackson said.

The World Conservation Congress now enters its second phase, where IUCN's members will elect a new president and Council and vote on the resolutions which will guide IUCN's work for the coming four years.

Based in Gland, near Geneva, in Switzerland, the IUCN is the world's oldest and largest global environmental network. It is a democratic membership union with more than 1,000 government and NGO member organizations, and almost 11,000 volunteer scientists and experts in some 160 countries.