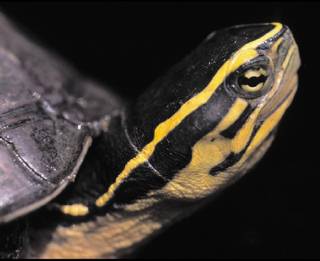 Unregulated trade—at 10 to 100 times legal levels—has caused Southeast Asian Box Turtles almost to vanish from parts of Indonesia where they were once common, according to a new report by the wildlife trade monitoring network TRAFFIC.

The turtles are used for meat and in Traditional Chinese Medicine, with major markets in Hong Kong, China, Singapore and Malaysia, mostly supplied from Indonesia. Box turtles are also in demand as pets in the US, Europe and Japan.

Each trader handled an average of just under 2,230 turtles a week, adding up to a combined total of 2.1 million Southeast Asian Box Turtles per year. The vast majority is destined for export, although Indonesia’s official annual export quota for this species is just 18,000 turtles—a figure set without a scientific basis.

“The number of Southeast Asian Box Turtles currently traded is certainly ten times the official export quota, and probably nearer 100 times it,” said Dr Sabine Schoppe, author of the new report, “Status, trade dynamics and management of the Southeast Asian Box Turtle Cuora amboinensis in Indonesia”
Thirteen of the 18 traders investigated were registered for some trade in reptiles, but not in box turtles, with the provincial offices of the Government’s Directorate General of Forest Protection and Nature Conservation (PHKA), which is required to inspect such businesses regularly. TRAFFIC has previously presented the results of the study to PHKA.

Collectors in Riau and Sulawesi reported huge falls in Southeast Asian Box Turtle numbers in the wild, and registered pet traders said they had experienced difficulties in obtaining turtles compared to a decade ago.

“The current level of illegal exploitation will result in Southeast Asian Box Turtles being systematically wiped out across Indonesia, indications of which are already obvious at collection and trade centres, ”said Schoppe.

In 2000, the Southeast Asian Box Turtle was listed in Appendix II of CITES (the Convention on International Trade in Endangered Species of Wild Fauna and Flora), a measure intended to regulate its international trade. However, the report found that following CITES-listing, trade in the box turtles had increased, with the largest numbers being smuggled through the ports of Makassar, Medan, Pekanbaru, Tembilahan and Banjarmasin.

“Authorities should concentrate on eradicating illegal trade, and in setting realistic limits on what numbers can safely be harvested,” said Chris R. Shepherd, Senior Programme Officer with TRAFFIC Southeast Asia.
Weak enforcement of existing laws is a key problem, caused through a combination of factors including non-inspection of shipments, falsification of CITES export permits, and lack of training amongst enforcement officers.

The report recommends better training and more co-operation between Indonesian enforcement authorities and those in importing countries to tackle illegal wildlife trade, for example through initiatives like the ASEAN Wildlife Enforcement Network (ASEAN-WEN), and research into populations of box turtles.