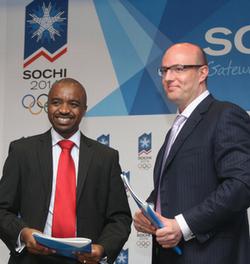 The Sochi Winter Olympics in 2014 will be the latest in a recent series of greener Olympic Games, according to an agreement signed on World Environment Day between the Russian Olympic organizers and officials from the United Nations Environment Programme.

At the signing ceremony in Moscow June 5, Theodore Oben, chief of the UNEP's Outreach Section, said, "I am sure the memorandum signed today will not only be a written commitment, but will guarantee that during the preparation and staging of Sochi 2014 great strides are made in environmental protection in Sochi and the Krasnodar Region."

Dmitry Chernyshenko, president and chief executive of Sochi 2014 and a Sochi native, said, "Signing this important Memorandum will help ensure Sochi 2014 is able to introduce Green Standards to every level of the Games' preparation and will ensure that the Organizing Committee continues to work with international environment experts to support this."

The Sochi Olympic organizers say they plan to invest US$1.75 billion in energy conservation and renewable energy and offset the remaining greenhouse gas emissions from the use of electricity, air travel and ground transportation.

Other environmental initiatives include the development of green belts in the city and reforestation of the Sochi National Park.

A series of conferences will allow international experts to monitor and analyze key environmental indicators before and after the Games and environmental education is planned.

Sochi, situated between the Black Sea and the snow-capped Caucasus Mountains in Russia's Krasnodar Region, is renowned for its pristine setting.

In an effort to preserve this natural beauty, the city in 2008 followed UNEP's recommendation to move the bobsleigh and luge tracks away from the Caucasus nature reserve. This UNESCO World Heritage site is one of the only mountain areas in Europe that remains virtually untouched by human activity. In changing the venue, organizers stressed that they are committed to creating an "environmental legacy for the future of the region."

"We developed the Sochi 2014 environmental strategy and this will ensure that the ecological situation in the Krasnodar Region is enhanced for generations to come," said Chernyshenko at the signing of the agreement.

The organizers marked the signing of the agreement by planting trees in several locations in Russia as part of UNEP's Billion Trees Campaign, and effort to combat climate change. To date, more than four billion trees have been planted as part of the campaign, and UNEP has set a new target of seven billion trees by the end of 2009 - one for every person on the planet.