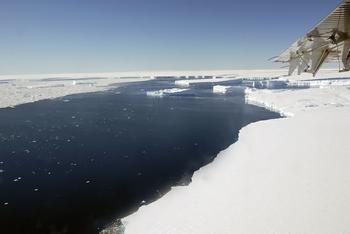 The thinning of a gigantic glacier in Antarctica is accelerating, scientists warned today, calling the loss of ice "alarming." The Pine Island Glacier in West Antarctica is losing ice four times as fast as it was a decade ago.

The research also reveals that ice thinning is now occurring much further inland. At this rate scientists estimate that the main section of the glacier will have disappeared in just 100 years, six times sooner than was previously thought.

"Accelerated thinning of the Pine Island Glacier represents perhaps the greatest imbalance in the cryosphere today, and yet we would not have known about it if it weren't for a succession of satellite instruments," says Professor Andrew Shepherd, a co-author of the research from the School of Earth and Environment at the University of Leeds.

The Pine Island Glacier is located within the most inaccessible area of Antarctica - over 1,000 km (600 miles) from the nearest research base - and was for many years overlooked.

Now, scientists have been able to track the glacier's development using continuous satellite measurements over the past 15 years.

Scientists believe that the retreat of glaciers in this sector of Antarctica is caused by warming of the surrounding oceans, though they say it is too early to link such a trend to global warming.

The 5,400 square kilometer (2,084 square mile) region of the Pine Island Glacier affected today is big enough to impact the rate at which sea levels are rising around the world.

The Pine Island Glacier is of great interest to scientists worldwide as it has been thinning at a rate of more than one meter per year and its flow rate has accelerated over the past 15 years.

The BAS scientists said, the wider region within which Pine Island Glacier lies is the most rapidly changing portion of the Antarctic ice sheet and its future impact on sea-level rise could be "very significant."

"The fast recession of Pine Island Glacier, predicted to be a possible trigger for the disintegration of the West Antarctic Ice Sheet, is attributed to enhanced basal melting of the glacier floating tongue by warm ocean waters," say NASA scientists who conducted radar studies of the glacier.