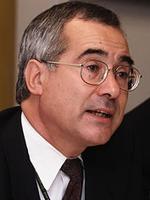 The world has a "50-50 chance" of avoiding global warming of more than two degrees Celsius, the threshold for dangerous climate change, if a strong political agreement can be reached at the United Nations conference in Copenhagen, and then implemented, says Lord Nicholas Stern, an economics and climate expert at the London School of Economics and Political Science. But, he says, a total of governments' most ambitious emissions reduction targets stated so far still fall short of that goal.

"If you add up the most ambitious of the intentions to reduce emissions that have been expressed so far, they are, if delivered, around two billion tonnes higher than the overall 2020 goal," Lord Stern said Wednesday.

Stern is basing his sense of the situation on a scientific and economic assessment of the range of paths for global annual emissions that are consistent with a 50 percent chance of avoiding a rise of more than two degrees Celsius. The analysis was conducted at the Centre for Climate Change Economics and Policy, which he chairs.

Assessment co-author Dr. Alex Bowen said, "It appears entirely feasible to lower global annual emissions to 44 billion tonnes or below by 2020 if effective policies are introduced now and countries take advantage of low-hanging fruit such as energy efficiency measures."
"However," said Bowen, "weak or delayed action to reduce emissions in the near term would require much stronger cuts after 2020, which would be likely to increase significantly the economic costs of meeting a 2°C target, and might make it impossible."
"The rich countries should find US$50 billion, or about 0.1 percent of their gross domestic product, a year by 2015 to help the developing countries, over and above existing commitments on development aid," Stern advised.