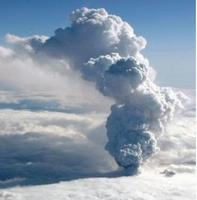 A towering cloud of volcanic ash from the erupting Eyjafjallajokull volcano in Iceland has spread across much of northern Europe, halting air traffic in eight European countries.

The last major eruption of this volcano in southern Iceland lasted for two years - from 1821 to 1823.

Today, the ash plume rises at least eight kilometers (five miles) above the Atlantic Ocean. The plume is near the flight paths for most routes from the United States Atlantic coast to European destinations.

Pilots can never fly through clouds of volcanic ash because these bits of pulverized rock and glass can melt in aircraft engines, causing power loss. The ash can damage aircraft electronic, hydraulic, ventilation, and data systems. Sulfur dioxide, another product of volcanoes also carried within the ash clouds following an eruption, is corrosive to aircraft.

European Commission Vice President Siim Kallas, who is responsible for transport said today, "The volcanic ash cloud is a very significant threat to air safety. National authorities are required to take decisions to ensure safety under international law, such as closure of airspace and airports, without discrimination between airlines."

"In this case, the airports and those responsible for air traffic control have taken very swift and appropriate action to safeguard the public. And there is excellent co-ordination and co-operation at European level, notably within Eurocontrol," said Kallas.

"This is a situation which is causing immense difficulties for passengers travelling throughout Europe. It can be considered a very exceptional circumstance. Nevertheless, it is important to remind passengers and airlines that EU passenger rights do apply in this situation," Kallas said.

Routes to handle the afternoon westbound flow have been moved to the south to avoid the volcanic ash zone, but it is expected that this flow of traffic will be disrupted.

Regular teleconferences attended by air navigation service providers, airport authorities, airlines and Eurocontrol's Central Flow Management Unit are being held to advise all parties of the status of air traffic.

At 1,666 meters (5,465 feet) in height, Eyjafjallajokull is one of Iceland's smaller glaciers. The current eruption was preceded by a series of earthquakes starting in early March, and a small eruption on March 20.

Wednesday's eruption is below the highest peak of Eyjafjallajokull, at the southern rim of the caldera. The Icelandic Met Office says, "No lava is seen yet but melt-water flows both north and south of the mountain."

Icelandic authorities evacuated some 800 residents from around the glacier as rivers rose by up three meters (10 feet).

Previous eruptions in the area have caused flooding due to the melting of glacial ice, but scientists say the current eruption is in an area covered by winter snow, not permanent ice.