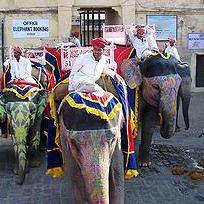 India's Environment Ministry has declared the elephant a National Heritage Animal in order to increase protective measures for the country's nearly 29,000 elephants. The government made the declaration in a notice signed Thursday by A.N. Prasad, inspector general of forests and director of Project Elephant.

The notice follows a recommendation for the protective status issued October 13 by the Standing Committee of the National Board for Wildlife.

The ministry's Elephant Task Force recommended the special status for elephants in a report August 31, saying the move will help in protecting Asia's largest mammals.
"Declaring it the National Heritage Animal will give it due place as emblem of ecological sensitivity. It will also mark recognition for its centrality in our plural cultures, traditions and oral lore," the task force wrote in its report.

Announcing the Elephant Task Force report, Environment Minister Jairam Ramesh said that elephants have been "part of our heritage since ages" and they should have the same degree of conservation importance given to them as is given to the tiger.

Calling the elephant by its local name, "Gajah," the report declares, "The Task Force is crystal clear on one point. India can secure the future for Gajah and its forest home."

"An India without elephants is unacceptable. But an India with elephants requires sustainable approaches that work on the ground," the task force wrote.

Sixty percent of elephants in Asia live in India, where 18 states host elephant populations making up an estimated national total of 26,000 in the wild plus about 3,500 in captivity.

Elephants die as a result of train hits, as did seven elephants in West Bengal's Jalpaiguri district in September. Dozens of India's wild elephants have been killed in recent years by trains - some in the same area as this collision.

There are the problems of human-elephant conflict, the diversion of land for mining, the destruction of habitat, and the loss of forest cover.

"It is not immediate extinction as much as attrition of living spaces and the tense conditions of the human-elephant encounter on the ground that require redress," the task force wrote in its report.

"As a long lived and sociable animal familiar to all of us since childhood, elephants may seem to require little help. But the shrinking of habitat and the selective killing off of tuskers in key populations by ivory poachers are cause for grave concern," the Task Force wrote.

To provide redress, the task force recommends that within the new National Elephant Conservation Authority will be a new Consortium of Elephant Research and Estimation that will develop and apply the best methods for enumeration.

The task force also recommended a new land conservation category of Elephant Landscapes. "These, 10 in number will include the existing and proposed 32 Elephant Reserves," the task force wrote.

While no new reserves were proposed, there will be a consolidation of the existing reserves. Over 40 percent of the land within Elephant Reserves does not have Protected Area or government forest status.

India should take the global lead in elephant conservation, with an International Elephant Congress and broader cooperation with Asian neighbors, the task force recommended.

"To secure the future for Gajah, the key is in our perceptions as much as in policies and programmes," wrote the task force in its report. "Declaring it the National Heritage Animal will recognize its dual identity as our symbol of ecology and of culture."