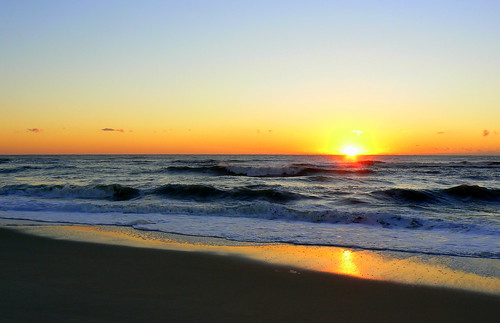 Oceans cover three quarters of the Earth’s surface, contain 97 percent of the Earth’s water, and represent 99 percent of the living space on the planet by volume. But human pressures, such as overexploitation, illegal fishing, unsustainable aquaculture, marine pollution, habitat destruction, alien species, climate change and ocean acidification are taking their toll.

June 8, World Oceans Day, this year marks the 20th anniversary of the day the United Nations Convention on the Law of the Sea entered into force. This treaty provides a comprehensive legal framework for all ocean activities and is critical to the sustainable use of the world’s seas and oceans.

Sunrise over the Atlantic shore of Assateague Island, a barrier island off the eastern coast of Maryland and Virginia, USA (Photo by Grace Alone)

But there are many threats to the oceans of the world.

Australian conservationists are alarmed because five mega ports will be allowed along the Queensland coast, mainly in areas near the Great Barrier Reef, the world’s largest reef and a UN World Heritage Site.

The UN’s World Heritage Committee has continued to express serious concern about Australia’s management of the Great Barrier Reef since 2011.

There is a strong and disturbing possibility that, within the next 12 months, the World Heritage Committee will decide to downgrade the Great Barrier Reef’s status to an “In Danger” status.

Oceans generate most of the oxygen humans breathe. They absorb about 30 percent of carbon dioxide produced by humans, buffering the impacts of global warming. And oceans serve as the backbone of international trade, and are important economically for countries that rely on tourism and fishing.

Oceans contain nearly 200,000 identified species, but actual numbers may lie in the millions. More than three billion people depend on marine and coastal biodiversity for their livelihoods.

Along the Pacific coast of North America, there is a new threat to marine biodiversity.

Just in the past two weeks, the incidence of sea star wasting syndrome has exploded along the Oregon Coast and created an epidemic of historic magnitude, one that threatens to decimate the entire population of purple ochre sea stars, researchers say.

Before this outbreak, Oregon had been the only part of the West Coast that had been spared this devastating disease.

U.S. Secretary of State John Kerry urged U.s. politicians to protect the oceans and welcomed the pressure from grassroots environmentalists that might motivate them to do so.

Some countries are acting to conserve marine species.

The British Virgin Islands moved on May 22 to establish a permanent shark sanctuary in its waters, joining The Bahamas and Honduras, which declared shark sanctuaries in 2011.

The designation by the cabinet of the British overseas territory prohibits commercial fishing of all shark and rays species throughout the full exclusive economic zone – an area of 30,933 square miles. The designation also bans the sale and trade of sharks and shark products within the territory. Many threatened or near-threatened shark species, including the oceanic whitetip, scalloped hammerhead, tiger, and Caribbean reef sharks, swim in the waters off the British Virgin Islands.

Worldwide, an estimated 100 million sharks are killed each year in commercial fisheries. As a result, the International Union for Conservation of Nature’s Red List of Threatened Species says that more than half of all sharks and sharklike species are threatened or near-threatened with extinction.