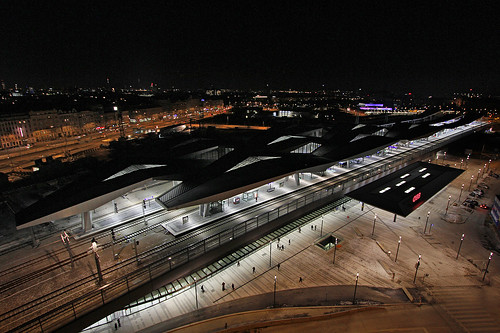 The station, which stands on the site of the former Vienna Südbahnhof, will connect passengers with other Austrian major cities and destinations in the Czech Republic, France, Germany, Greece, Hungary, Italy, Slovenia, Slovakia and Poland.

Although new streets have been built to connect the station to the city’s road network, there is no direct route for car traffic through the site. Instead, an underpass and two bridges provide connections for cyclists, pedestrians and public transport users.

The station provides the greatest convenience for sustainable modes of transport, offering 1,150 bicycle stands compared to 630 parking spaces for cars.

The new station is designed to be quiet, with eight kilometers (five miles) of noise protection walls built in.

In the future, more infrastructure for alternative modes of transport will be created around the station, such as a bridge with lanes and paths for pedestrians, cyclists and motor vehicles, scheduled for completion in 2015.

Some 200,000 visitors crowded the new station on the two opening days, October 10 and 11, to experience its vast expanse and open, modern architecture, and enjoy special shows featuring pop stars and ski stars.

For the first time, trains will arrive in the Austrian capital from all directions and head out to destinations in all directions. More than 1,100 trains carrying an estimated 145,000 passengers will use the station daily, say Austrian officials say.

The first long-distance trains will arrive on December 14. From December 2015 the entire rail infrastructure is expected to be complete and filling its role as an international transport hub.

The new station is the showpiece of a four billion euro urban renewal project that covers around 109 hectares in Vienna’s 8th district.

The development includes a 20,000 square foot shopping center with 90 shops and 5,000 new apartments to accommodate 13,000 residents, offices for 20,000 employees and space for hotels, shops, services and caterering operations.

The entire development is a project of the Austrian government-owned ÖBB Group, which says it is dedicated to providing “nationwide eco-friendly transportation of persons and goods.” The Republic of Austria holds 100 percent of its shares, and management is the responsibility of the Austrian Federal Ministry of Transport, Innovation and Technology.

The European Union is seeking to harmonize technical rules in the railway sector Europe-wide, with a view to guaranteeing the interoperability of international rail traffic, the ministry states on its website.