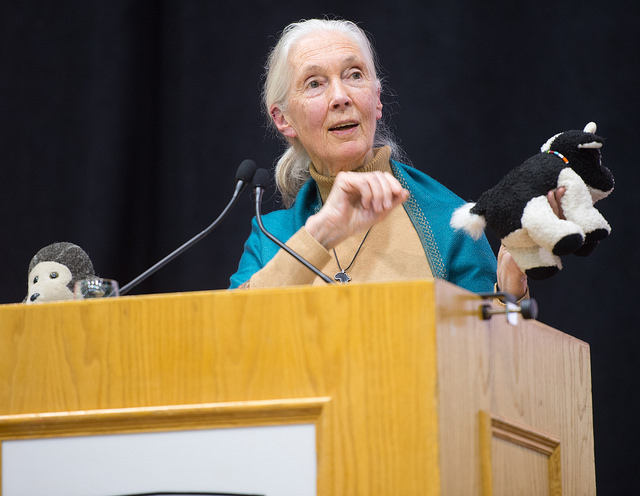 Dame Jane Goodall travels the globe 300+ days each year – with a cow – a small black and white stuffed toy. The British scientist and UN Messenger of Peace is also an animal activist.

During the 2015 United Nations climate change talks, COP21, Dame Goodall and Azzedine Downes, president and CEO of the International Fund for Animal Welfare, came to Paris to discuss animals and global warming. The two talked conservation and answered questions during an after-hours event at the Paris Museum of Science and Industry.

Both Goodall and Downes, renowned animal conservation thought leaders, are amazed that the world is not yet willing to seriously consider the climate consequences of the world’s ever-increasing appetite for meat. Yet they have hope.

COP21 is the 21st meeting of the 196 Parties to the United Nations Framework Convention on Climate Change, UNFCCC. During the two-week meeting, which opened November 30, government delegates have been negotiating the text of a new universal, legally-binding climate agreement to limit emissions of six greenhouse gases.

One of those greenhouse gases is methane.

Yet, animal agribusiness and the impact of methane emissions on global warming was mentioned only once in the COP21 venue here in Paris, when the Humane Society International sponsored a side event open to all.

Methane is produced during an animal’s digestive process and when animal manure is stored in holding areas.

Total methane emissions from global livestock as reported by the UN’s Food and Agricultural Organization “is 7.1 gigatonnes of CO2-equivalent per year.” This “represents 14.5 percent of all anthropogenic GHG emissions.”

Jo Leinen, a Member of the European Parliament representing Germany, was on the Humane Society International panel for the group’s event. He has long been a champion for both the environment and animal welfare. He decries the fact that animal agriculture usually hurts animals, human health, and the planet.

MEP Leinen estimates that 76 billion animals are raised and killed around the globe each year for food production. “Meat contributes more to GHG emissions then worldwide traffic,” he says.

“With a world of seven billion [people], and tomorrow 10 billion, if everyone eats meat like this we can forget about climate,” Leinen warned.

Putting animal cruelty aside, the amount of water used to produce meat and the impact of methane on global warming are only the beginning of meat production’s environmental harms. In addition, the Earth is scarred by land degradation, water pollution, and air pollution.

Humane Society International is raising awareness in politicians, scientists, physicians and consumers. The organization is working to get animal agribusiness a landing place in multilateral agreements.

MEP Leinen is already taking action in his capacity as President of the European Parliament’s delegation for relations with China.

Concerned about cruel and unhealthy animal production in China, he recently announced change, saying, “From now on, the issue of animal welfare will be on the agenda in future talks between EU MEPs and their Chinese counterparts.”

The message delivered by the handful of experts discussing animal agriculture and animal welfare on the sidelines of COP21 is clear. “Less meat, less heat” helps the environment, humans, and animals.

Farm animals will not be mentioned in the 2015 Paris Agreement. But, advocates promise that agribusiness will be on the agenda of the post-Paris cycle.