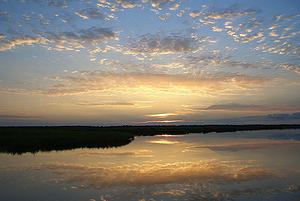 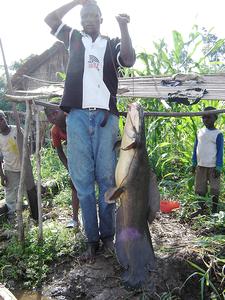 The Democratic Republic of Congo has finalized designation of a vast expanse of equatorial rainforest as the world's largest Wetland of International Importance under the Ramsar Convention.

The huge Ngiri-Tumba-Maindombe wetland in the heart of the Congo Basin was proposed for protection under the convention last July, but all the paperwork was only just completed, according to Dwight Peck of the Ramsar Convention on Wetlands, an international treaty that provides for protection and wise use of wetlands.

Lying on the eastern side of the Congo River very close to the Equator, the Ngiri-Tumba-Maindombe wetland holds the record because it is more than twice the size of Belgium, extending over 25,365 square miles (6,569,624 hectares) of marshy rainforest punctuated by rivers and lakes.

The area encompasses several rivers and nine lakes that constitute a major sink for the greenhouse gas carbon dioxide, and support a diverse range of rainforest plants and animals.

The site is inhabited by buffalo, various species of monkeys, forest elephants, and leopards. Waterbirds found only in the biome of the Guinea-Congo forests are seen throughout the site, which also supports some 150 species of fish.

The site is adjacent to the vast Grands Affluents Ramsar site across the Congo River, which covers 22,811 square miles (5,908,074 hectares).

The groundwork for the new designation was facilitated by WWF's International Freshwater Programme and WWF democratic Republic of Congo, and support was provided by the U.S. Agency for International Development through its Central African Regional Programme for Environment.