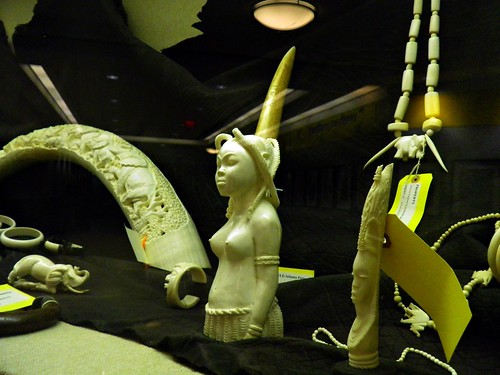 The measure makes federal prohibitions applicable to the ivory and rhinoceros horn trade within New Jersey, and includes strict penalties for those caught dealing in the black market for these products.

“These stricter measures will help to reduce the amount of criminal activity that surrounds this industry while protecting wildlife populations that are already seriously threatened from this harmful practice.”said Governor Christie.

Ivory trafficking is at the highest rate ever recorded, Senator Lesniak said, with more than 41 tons of illegal ivory confiscated worldwide last year.

The bill was sponsored by State Senator Raymond Lesniak, a Democrat. “With raw ivory selling for approximately $1,500 a pound the black market trade is thriving,” he said. “An estimated 35,000 elephants are slaughtered in Africa alone. At this rate, elephants will be killed into extinction within 20 years.”

The bill would treat the presence of ivory or a rhinoceros horn in a “retail or wholesale outlet commonly used for the buying or selling of similar products” as “presumptive evidence” of possession with intent to sell the product.

Environmentalists are pleased with the new law. Adam Roberts, chief executive of Born Free USA, which supported the bill, said, “New Jersey has emerged as a powerful leader on these issues. This new law is of particular importance because the port of Newark is a hub for illegal wildlife trade.”

In June, New York State passed a law placing permanent ban on the sale of elephant and mammoth ivory and rhino horn.

All five rhino species are at risk of poaching. Africa’s black rhinos are critically endangered, with a population of fewer than 5,000. There are only 3,000 one-horned rhinos remaining in India and Nepal. In Southeast Asia, a few hundred Sumatran rhinos and a few dozen Javan rhinos cling to survival. Their horns, made of keratin, a fingernail-like substance, are used in traditional Chinese medicine, despite conclusive evidence that they have no curative properties.