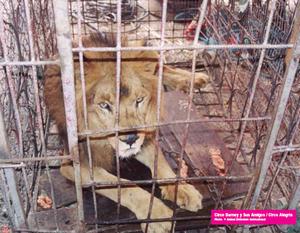 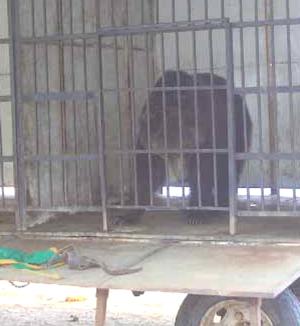 Bolivian President Evo Morales has signed the world's first law prohibiting the use of both wild and domestic animals in traveling circuses.

The Bolivian law, signed earlier this month, was tabled by Congresswoman Ximena Flores of Potosi. It is expected to be published shortly.

The law arose as a result of evidence gathered during an undercover investigation by the nonprofit Animal Defenders International.

Investigators found lions confined in a tiny cage on the back of a truck - two were pregnant but were forced to continue to perform. ADI videos show circus employees beating a lion in the circus ring with a baton and beating a caged lion with a metal pan. In one video, a caged lion was jerked by a chain around its neck by circus workers outside the cage, causing visible pain.

Three brown bears were kept in tiny compartments measuring just 2.5 x 3 meters (8.2 x 9.8 feet) inside a cage on the back of a truck. Their only exercise was the walk to and from the ring for their short performance. There were no safety barriers to protect the audience as the animals were made to dance, play dead and ride a bicycle.

Other ADI videos showed circus employees beating a wolf and a llama in the circus ring. The findings of the investigation were presented to the Bolivian Congress together with a report from Animal Defenders International on the scientific evidence of suffering of animals in traveling circuses, "The Science on Suffering."

The new law bans the use of wild and domestic animals in circuses in the Bolivia, as their conditions and confinement are considered acts of cruelty.

The circuses will be allowed one year to adapt their shows to a humans-only program and during this time, the government will issue regulations on confiscation and monetary sanctions for any breaches of the law.