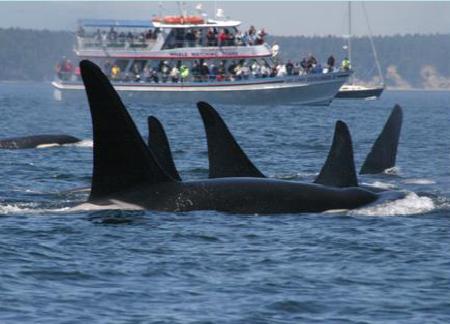 The proposed rules would prohibit vessels from approaching any killer whale closer than 200 yards and forbid vessels from intercepting or parking in the path of a whale.

These large marine mammals, also called orcas, are the subject of intense curiosity from kayakers to commercial whale-watching tours, were added to the Endangered Species list in November 2005.

In the final rule announcing the listing, federal marine scientists identified vessel effects, including direct interference and sound, as a potential contributing factor in the recent decline of this population. NOAA Fisheries Service is concerned that some whale watching activities may cause harassment, harm killer whales or cause detrimental individual and population level impacts.

In addition, the proposed regulations would set up a half-mile-wide "no-go zone" along the west side of San Juan Island from May 1 through the end of September where no vessels would be allowed, said Barry Thom, acting head of the NOAA Fisheries Service Northwest regional office.

The federal fisheries agency said there would be exemptions to the rules for some vessels, including those actively fishing commercially, cargo vessels travelling in established shipping lanes, and government and research vessels. The no-go zone would also have limited exceptions for land owners accessing private property adjacent to it.

The whales depend on their highly sophisticated sonar to navigate and find food. They can be affected by underwater noise from boats and disturbed by vessels that approach too close or block their paths.

The population peaked at 97 animals in the 1990s and then declined to 79 in 2001. It currently stands at 85 whales. The agency's recovery plan for this killer whale population, released in early 2008, calls for actions to reduce disturbance from vessels.

If adopted, the earliest the rule would take effect would be May 2010. The agency said it will hold public meetings September 30 in Seattle and October 5 in Friday Harbor for people to learn more about the proposed rules. The public comment period on them closes October 27.

One 2004 study found that marine mammals exposed to human-generated noise released increased stress hormones with the potential to negatively affect their nervous and immune systems.