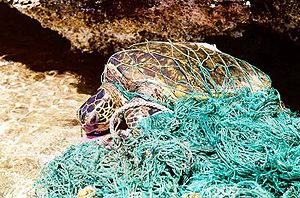 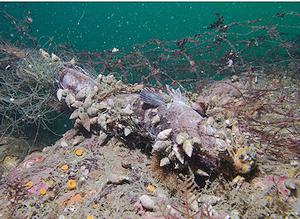 Long after fishing gear is lost at sea or abandoned by fishers it continues to harm the marine environment, depleting fish populations through "ghost fishing" and posing a hazard to ships, finds a new joint report released today by the UN Food and Agriculture Organization and UN Environment Programme.

The new report comes as nations prepare to gather for next week's World Oceans Conference in Manado, Indonesia, where the restoration of healthy marine environments will be high on the agenda.

The report finds that most fishing gear is not deliberately discarded but is lost in storms or strong currents or results from gear conflicts - fishing with nets, for instance, in areas where bottom traps that can entangle them are already deployed.
In the past, poorly operated drift nets were the prime culprits, but a 1992 ban on their use in many areas has reduced their contribution to ghost fishing.

Gill nets, fishing pots and traps are most likely to "ghost fish," continuing to catch continued fish, turtles, seabirds, and marine mammals, which are trapped in the nets and die, according to the report.

In the largest U.S. estuary, Chesapeake Bay, an estimated 150,000 crab traps are lost each year out of an estimated 500,000 total deployed.
On just the single Caribbean island of Guadeloupe, about 20,000 of all traps set each year are lost each hurricane season - a loss rate of 50 percent. Like gill nets, these traps can continue to fish on their own for long periods of time.

Longlines are more likely to ensnare other marine organisms and trawls are most likely to damage sub-sea habitats.

The problem of abandoned, lost and discarded fishing gear is getting worse due to the increased scale of global fishing operations and the introduction of highly durable fishing gear made of long-lasting synthetic materials, the two UN agencies report.

"There are many ghosts in the marine environment machine from overfishing and acidification linked with greenhouse gases to the rise in de-oxygenated dead zones as a result of run off and land-based source of pollution," said UNEP head Achim Steiner.

"Abandoned and lost fishing gear is part of this suite of challenges that must be urgently addressed collectively if the productivity of our oceans and seas is to be maintained for this and future generations, not least for achievement of the UN Millennium Development Goals," said Steiner.

Abandoned, lost or discarded fishing gear in the oceans makes up around 10 percent (640,000 metric tonnes) of all marine litter, the report estimates.

"The amount of fishing gear remaining in the marine environment will continue to accumulate and the impacts on marine ecosystems will continue to get worse if the international community doesn't take effective steps to deal with the problem of marine debris as a whole," said Ichiro Nomura, FAO assistant director-general for fisheries and aquaculture.