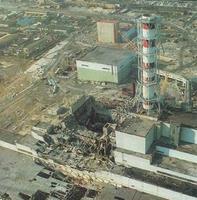 Nearly one million people around the world died from exposure to radiation released by the 1986 nuclear disaster at the Chernobyl reactor, finds a new book from the New York Academy of Sciences published today on the 24th anniversary of the meltdown at the Soviet facility.

The book, "Chernobyl: Consequences of the Catastrophe for People and the Environment," was compiled by authors Alexey Yablokov of the Center for Russian Environmental Policy in Moscow, and Vassily Nesterenko and Alexey Nesterenko of the Institute of Radiation Safety, in Minsk, Belarus.

The authors examined more than 5,000 published articles and studies, most written in Slavic languages and never before available in English.

"No citizen of any country can be assured that he or she can be protected from radioactive contamination. One nuclear reactor can pollute half the globe," they said. "Chernobyl fallout covers the entire Northern Hemisphere."

Their findings are in contrast to estimates by the World Health Organization and the International Atomic Energy Agency that initially said only 31 people had died among the "liquidators," those approximately 830,000 people who were in charge of extinguishing the fire at the Chernobyl reactor and deactivation and cleanup of the site.

"On this 24th anniversary of the Chernobyl disaster, we now realize that the consequences were far worse than many researchers had believed," says Janette Sherman, MD, the physician and toxicologist who edited the book.

Drawing upon extensive data, the authors estimate the number of deaths worldwide due to Chernobyl fallout from 1986 through 2004 was 985,000, a number that has since increased.

On April 26, 1986, two explosions occured at reactor number four at the Chernobyl plant which tore the top from the reactor and its building and exposed the reactor core. The resulting fire sent a plume of radioactive fallout into the atmosphere and over large parts of the western Soviet Union, Europe and across the Northern Hemisphere. Large areas in Ukraine, Belarus, and Russia had to be evacuated.

Yablokov and his co-authors find that radioactive emissions from the stricken reactor, once believed to be 50 million curies, may have been as great as 10 billion curies, or 200 times greater than the initial estimate, and hundreds of times larger than the fallout from the atomic bombs dropped on Hiroshima and Nagasaki.

Numerous reports reviewed for this book document elevated disease rates in the Chernobyl area. These include increased fetal and infant deaths, birth defects, and diseases of the respiratory, digestive, musculoskeletal, nervous, endocrine, reproductive, hematological, urological, cardiovascular, genetic, immune, and other systems, as well as cancers and non-cancerous tumors.

In addition to adverse effects in humans, numerous other species have been contaminated, based upon studies of livestock, voles, birds, fish, plants, trees, bacteria, viruses, and other species.

Foods produced in highly contaminated areas in the former Soviet Union were shipped, and consumed worldwide, affecting persons in many other nations. Some, but not all, contamination was detected and contaminated foods not shipped.

The authors warn that the soil, foliage, and water in highly contaminated areas still contain substantial levels of radioactive chemicals, and will continue to harm humans for decades to come.

Little research on Chernobyl health effects in the United States has been conducted, the authors found, but one study by the Radiation and Public Health Project found that in the early 1990s, a few years after the meltdown, thyroid cancer in Connecticut children had nearly doubled.

This occurred at the same time that childhood thyroid cancer rates in the former Soviet Union were surging, as the thyroid gland is highly sensitive to radioactive iodine exposures.

The world now has 435 nuclear reactors and of these, 104 are in the United States.

The New York Academy of Sciences says not enough attention has been paid to Eastern European research studies on the effects of Chernobyl at a time when corporations in several nations, including the United States, are attempting to build more nuclear reactors and to extend the years of operation of aging reactors.

The academy said in a statement, "Official discussions from the International Atomic Energy Agency and associated United Nations' agencies (e.g. the Chernobyl Forum reports) have largely downplayed or ignored many of the findings reported in the Eastern European scientific literature and consequently have erred by not including these assessments."